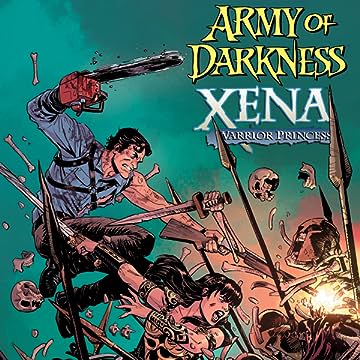 Forever… And a Day

Xena Warrior Podcast Episode 22 is about the episode “Destiny,” which introduces Julius Caesar. Listen to the episode before reading this commentary.

The hosts focus on film studies scholarship and they discuss lots of source material, such as The Life and Death by Julius Caesar, by Shakespeare.

As kind of an aside, they include a joke about Caesar conquering “three provinces of Gaul” but don’t provide the source for that. So that is “The Gallic Wars,” by Julius Caesar himself.

So it’s another Julius Caesar inside joke.

The “Destiny” transcript is:

JC: Gaul is divided into three parts. Each area speaks its own different dialect. One day I’ll conquer all three provinces.

I’m not implying in any way that the podcasters did not know that, only that they did not include it in the episode. So here it is! Footnoted and laminated.

While I’m here, let me promote the Xena / Army of Darkness comic book crossover, Forever… And a Day. It time-travels quite a bit, and has an issue devoted to Xena’s pirate days as featured in “Destiny.”

Here’s a link to Julius Caesar at TVTropes. Happy reading.

I am Rysler and I do not know the hosts of this podcast.

There will be no bashing of fans, experts, TPTB, or source material. We are toxin-free zone. Anything spurious is intended in good humor. This show is over ten years old. C’mon, guys.

Heterosexuality will be tolerated here. :: puts a quarter in the jar::

I’m a librarian and information theory will pop up from time to time. There will also be an excessive amount of Buddhism.

Supposed Crimes is a publisher of LGBTQ fiction, including free lesbian novels from Geonn Cannon. Cannon’s new webseries featuring Riley Parra drops soon from the producers of Nikki and Nora.